Fast and rising singer, Anthony Victor, better known as Victony, reacts to allegations of using his wheelchair condition to promote his career.

It would be recalled that the singer had a car accident that confined him to a wheelchair even though he made efforts to stand on his own a few times.

An insensitive tweet by a Twitter user, however, suggested that Victony was using his condition all along to get on the emotional side of fans.

“One day we will talk about how victony used wheel chair tax on us,” the user wrote.

“Bout time we hand niggas their own mics & wheel chairs for peace sake.” 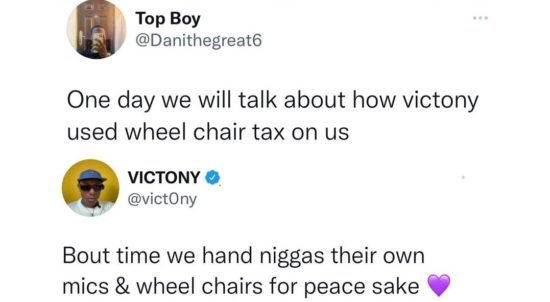 Portable spotted all loved up with mystery lady (Video)
“Intimacy doesn’t mean sex” Denrele Edun reacts to backlash for insinuating he was intimate with late singer, Goldie
To Top