Wizkid has said he will get married in 2020 and will also unite his babymamas to be friends.

Nigerian singer, Wizkid has announced that he is set to unite babymamas ahead of a grand Wedding ceremony he wants to hold in 2020.

Wizkid stated that he has choosen to change his ways and has announced that he will be getting married come the year 2020 when he finally turns 30.

He took to his social space few moments ago to make this christmas eve resolution. 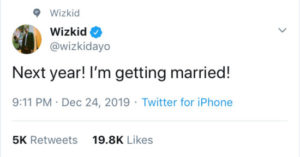 But before he posted the tweet attached above, Wizkid had first penned a heartfelt apology to an undisclosed person who he tagged as “his baby”.

He apologized for breaking the person’s heart and revealed that he hopes the person his fine.

He then went ahead to state that he wants to change his ways and be a better person, reunite his wives(babymamas) to be friends.

Read the tweets below; 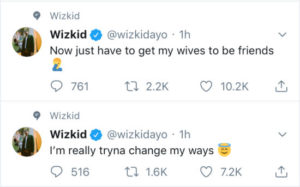 ‘Made In Lagos’ Album Ready – Wizkid Announces Hurray Wizkid FC and all lovers of Afrobeats music, the chef Wizkid has finished cooking some gbedu for us all. In other news the highly publicised ‘Made […]