One of such communities is Agasha where a significant number of residents depend on a shallow well dug in a swamp beside the dried-up river for residents to get water.

A new report by TheCable has revealed that some communities in Benue State have been coping with the hardship of scarcity of water as residents have to dig shallow pits to get dirty water for drinking and domestic purposes.

One of such communities is Agasha where a significant number of residents depend on a shallow well dug in a swamp beside the dried-up river for residents to get water, The Cable reports.

The newspaper reports that the locals have to queue up daily with several sizes of bowls and basins to fetch.

“Every day I come here and see the water dried up, it makes me cry,” said an old woman addressed as Mama.

“Now, not only do we use dirty water, it is not enough for everyone. To have water at all for your daily usage, you will have to wake up around 3 am to join a long queue.”

“And when that happens, we usually fall back on swampy areas for water. That’s where diseases like the one that made me blind come from,” said James, an elderly resident of Agasha.

Mike Igber, chairman of the water, sanitation and hygiene committee (WASHCom) in Agasha, said the military once donated a hand pump borehole to the community but it stopped working “a long time ago” and that no attempt has been made to fix it.

“The saddest tale is that no state government in the last 50 years has ever done anything about the community’s water dearth,” said Igber.

Like it is in Agasha, the river in Ipaav, Gboko LGA, once served the community, but these days, it has dried up and the residents have dug a makeshift well in a swamp around the area. Although the water is unclean, residents have no choice but to use it for their daily needs.

Joseph Agibee Terlumun, the community spokesperson said it was disheartening watching the residents drink the water.

“I was born in this community just as my father was. Though, I wouldn’t know how long (old) this community is; but I can state categorically that I have never seen any government agencies here,” he said.

“It is only during electioneering when some of them will send their boys to come and give us things like seasonings and salt just to vote for them.

According to this publication, in Oye-Obi, a community in the 66Oju local government area, which is surrounded by rivers on every side, water scarcity is not a problem. But while water is always available, the River Obi which the community relies on is permanently unclean; it is dirty and has an offensive smell. 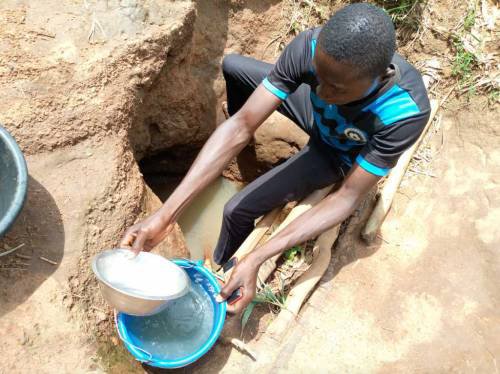 Regardless of the state of the water, residents are always at the river bank to scoop some for their daily use.

“Ours is now like a community that has never been a part of Benue state or this whole country,” says 72-year-old Abraham Ogbu Ijih.

“Our lives are now marked by abject poverty and poor living conditions. We are surrounded by water and forest on every side. Yet, we are thirsty with no access to clean water.”

Ijih, a visually impaired man who has lived in Oye all his life, said he lost his wife and children to a “water epidemic” in 2020.

“I went blind six years ago. I wasn’t blind from childhood. But in 2020, I lost my wife and three children to water impurities. There was a period in this community where a water epidemic killed about 273 people according to our communal records,” the former rice farmer said.

Clement Onaa, chairman of Oju LGA, acknowledged the water problems in the communities but said there has been some intervention from the state and federal governments.

“We are working in collaboration with the state government and the federal ministry of water resources and environmental sanitation and we have recorded some level of intervention,” he said.

“Some of those interventions include the provision of solar-powered motorised boreholes to the people of Oye-Obi. The community had water pollution sometime ago and part of the interventions was to ameliorate their plight of bad water.

“Waters in our place are always recharged with rainfall and whenever there is no rainfall, the volume of water reduces.”

Onaa called on the state and Nigerian government to provide more boreholes to the affected communities.

In Otobi community located in Otukpo LGA, there are shallow wells dug on both sides of the road. And despite the milky colour of the water, children are always found around them; excited to fill their basins and pots to the brim.

Richard Inalegwu, a resident of the community, said they have no functioning borehole, adding that all the residents drink from the same place, save for those who don’t mind walking long distances to some neighbouring communities that have boreholes.

“When it comes to drinkable water, we don’t have options. It’s either you drink the water or not, since I was born and have been living in this community,” he said.

Rachel Agbenu, another resident who had a heap of dirty clothes to wash, said: “The scarcity of water is worrisome. My family has not been able to wash our clothes for the past three weeks because there is no water. We have even reused some of our dirty clothes.

“Just to drink water, we often go to a nearby community a little far from here. Even at that, the water is not always clean and people are always too mamy there, and there is never enough water to go round everyone.

“Sometimes, we spend nights there.”