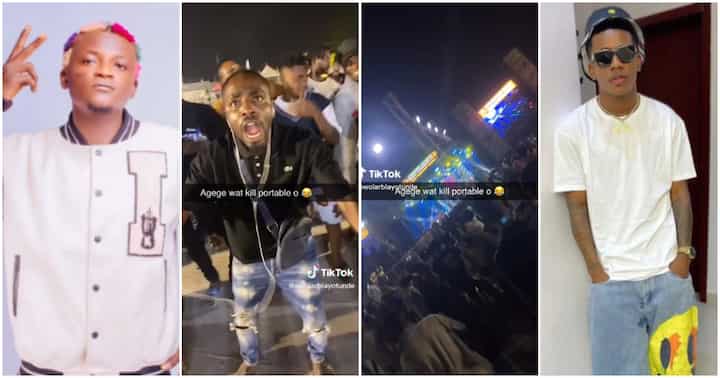 Portable stoned in Agege as crowd prevent him from performing; Small Doctor begs on his behalf

Portable stoned in Agege as crowd prevent him from performing; Small Doctor begs on his behalf

Popular Nigerian singer, Portable, is in the news again for controversial reasons after he went to perform in Agege.

The Zazu Zeh crooner had a show in the area but the crowd did not seem pleased to see him going by their reactions.

In a series of videos that were posted on social media, the controversial singer was seen being stoned with bottles as he took to the stage in Agege.

According to reports, the crowd prevented Portable from performing and some of them even demanded that he prostrate in apology.

In one video, some guys were seen at the venue shouting that Portable should recognise that he is in Agege and that he should also prostrate to them.

See the clip below;

Paul Okoye’s Ex-Wife, Anita Celebrates Christmas With Their Children (Photos)
“May Zukwanike” Yul Edochie tells wife, May to ‘rest’ as he reacts to a photoshopped family photo that includes Judy Austin
To Top