Nigerian superstar Olamide and his label YBLN have signed an exciting deal with an American distribution, records, and publishing company, Empire.

This was revealed by the YBLN boss, Olamide Adedeji, on Tuesday night. He also stated that any artiste he signs, including FireboyDML, will reap from the resources, relationships and benefits tied to the joint venture deal he signed with EMPIRE.

“Happy to announce that YBNL and Empire got a joint venture deal. Myself (I) and Fireboy with any other act I sign next ready to shake the world.”

Olamide also hinted that more albums will be released soon: “Time to get to work and serve you guys new Baddo album and new Fireboy album.”

In response to the announcement, Fireboy congratulated his boss, Olamide, and thanked him for his support.

“YBNL/Empire. Congratulations, King. thank you for everything,” Fire Boy wrote on Twitter. 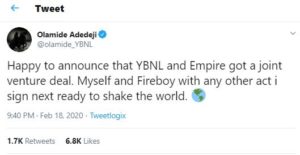 EMPIRE was founded in 2010 by Ghazi Shami a music technology graduate of San Francisco State University. The company is headquartered in San Francisco, California with offices in New York City, London, and Atlanta. 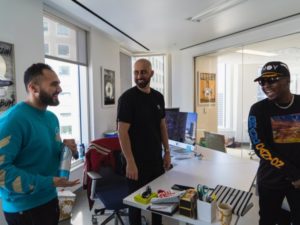 The music company houses international artistes such as Snoop Dogg, Tyga, Kendrick Lamar, Steel Wool, Jazz Anderson, and so many other artistes and record labels.

Singer, 9ice Is Finally Getting Married To His Babymama (Photos)
Naira Marley Has Now Signed Me To His New Record Label – Mohbad Announces
“I have been aging backwards since i left my brother” – Peter Okoye
How we became most sought after and our plan to take over Africa in 2020! – AudioMack
Singer, Waje Reveals What She Yearns To Do Intimately With Her Future Husband
Akon To Begin 2020 African Tour With Ghana
READ ALSO:  Olamide Reveals He & Fireboy DML Are Making Plans To Drop New Albums