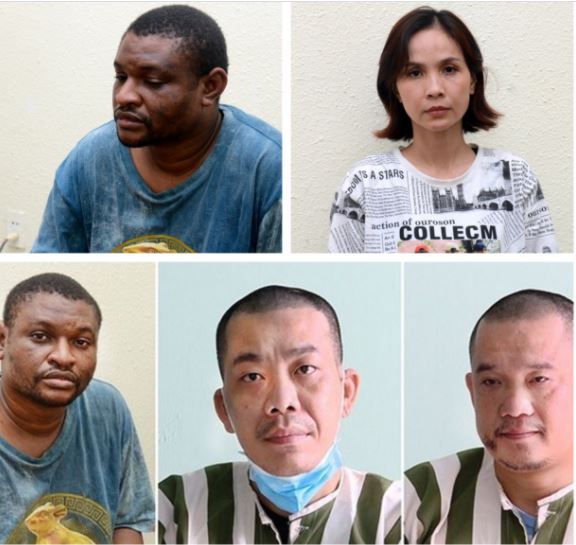 It has been reported that the police in Vietnam’s southern Ba Ria – Vung Tau Province have arrested a Nigerian man, Uzor Emmanuel and four other alleged members of a transnational scam ring accused of duping a local firm of US$110,000.

According to initial information about the case, at the end of October 2021, P.C., a company based in the province’s Phu My District, reported to local police that it had been cheated of nearly US$110,000.

Earlier on October 18, P.C. was informed by its business partner, J.W., that the latter had made a payment of some US$110,000 to the former through a bank account of Samar For Import Co., Ltd (called in short as Samar).

J.W. explained that it on October 14 received from P.C. an email requesting J.W. to pay the amount to the account of Samar that was stated in the email as the recipient of the payment.

The false email address was very similar to the real one, police said.

Police immediately blocked the bank account of Samar to prevent the offenders from withdrawing the money.

Knowing their trick had failed, the five members of the ring attempted to flee abroad but were eventually arrested in Ho Chi Minh City.

Samar, located in the city’s Go Vap District and headed by Vu Thanh Trung as director, was a bogus company set up as a tool of the swindling ring, police said.

Further investigation showed that Uzoh Emmanuel got acquainted with Hanh in 2017 via social media and the two later lived as a couple at a luxury apartment in Ho Chi Minh City.

In August 2021, the Nigerian man asked Hanh to hire some Vietnamese to establish bogus companies to serve his fraudulent schemes.

The foreigner promised to pay Hanh and her team 10 percent of every amount he could earn from swindles.

Vinh later colluded with Dung and Trung to establish 11 bogus businesses whose directors were the two men.

In order to carry out cheating schemes, Emmanuel and his overseas accomplices hacked the internal computer systems of a number of enterprises to collect their business information.

They went on to create email addresses similar to those of some companies, then used such fake emails to ask partners of such companies to transfer payments to the bank accounts designated by them.

With such a trick, before committing to the above-mentioned swindle, the ring successfully cheated a Europe-based enterprise of more than VND6 billion ($264,700) in late August.

The provincial police are deepening investigation into the transnational swindling ring.