The 36-year-old said this in an Instagram post on Tuesday after a user asked the actress to return the SUV she took from Kpokpogri.

Nigerian actress Tonto Dikeh has stunned her followers by revealing that her ex-boyfriend Pince Kpokpogri has at least 30 illegally recorded sex tapes in his possession.

She made the revelation in an Instagram post on Tuesday after a user asked the actress to return the SUV she took from Kpokpogri.

Reacting, the actress who alleged that Kpokpogri pointed a gun to her head, threatening to kill her, also claimed that her ex-lover has 30 illegally recorded sex tapes.

“He needs to answer for putting a gun to my head (Attempted murder). Threatening my life and the possession of over 30 illegally recorded sex tapes.,” she wrote.

Tonto also added that she was not bothered about the SUV as she has other fleets of cars.

“A 2017 refurbished Lexus isn’t the/my issue. I drive a Bently, I have a Maybach on the way, I have a gwagon, I have a Lexus car and Mercedes van,” she wrote.

Kpokpogri was reportedly detained by the police on Monday after an altercation with the actress at a hotel in Abuja over the SUV. 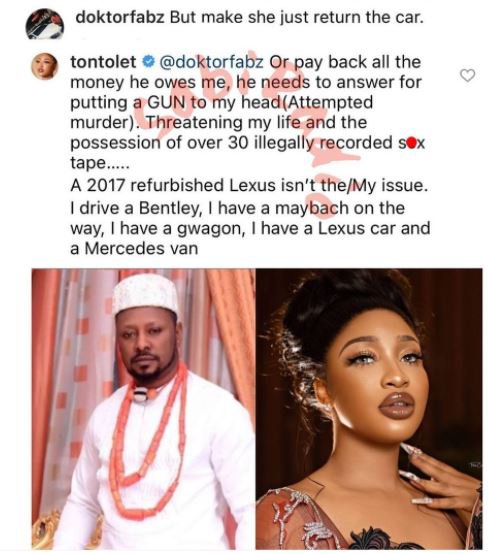