Artiste manager, King Patrick has made a u-turn regarding his recent audio tape that was leaked where he furthered his allegations against Davido and Peruzzi, disclosing that Davido tried to poison him.

The audio made rounds on social media less than 24hours ago and it complicated the drama; which already has exposed dirty secrets about Davido, Peruzzi and Chioma.

But King Patrick made a shocking turn as his tweet of apology popped up on our Twitter timeline. In the Tweet, he tendered his apology to everyone was affected by the tape.

According to him, he didn’t intend to grant the interview and wasn’t aware the tape would be leaked. 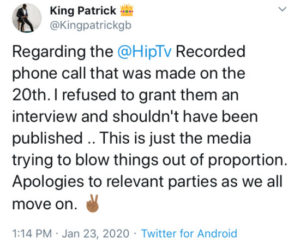