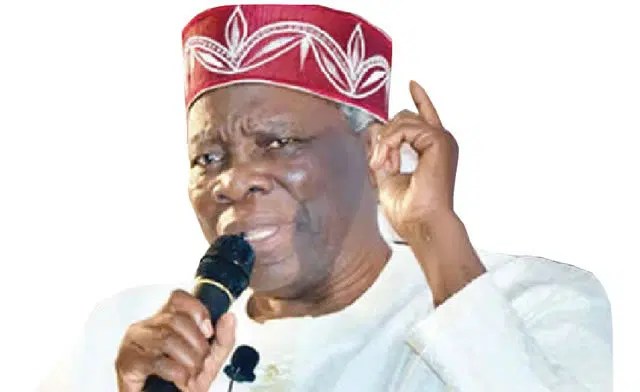 The exit was based on the ground that the “objectives of some leaders in the alliance conflicts with the agitation of Yoruba Nation for self-determination,” adding that “in the light of the current development in the Yoruba Self-Determination struggle, especially, in Ilana Omo Oodua, it has become very necessary for the Yoruba people to dissociate themselves from the Alliance known as NINAS with immediate effect.”

In a statement signed by Akintoye and 44 other leaders of IOO, the group said it is very imperative, sacrosanct and germane for the Yoruba bloc to quit the Alliance in order to preserve the integrity and reputation of the Yoruba Nation agitation for self-determination.

“It is our well-considered opinion that some of those we align with in NINAS do not want the kind of self-determination that we the Yoruba people want. Therefore, we the leadership of Ilana Omo Oodua, wish to inform the general public that the Yoruba Bloc under the leadership of Ilana Omo Oodua Worldwide has moved out of the Nigerian Indigenous Nationalities Alliance for Self-Determination (NINAS) with immediate effect in order to safeguard the integrity and honour of our agitation for self-determination.

“We thank the Leader of LNC, Mr Tony Nnadi, for his inputs to the NINAS struggle since inception. However, it is now obvious to most people in the Yoruba self-determination struggle that the LNC is not working in tandem with our objective in Ilana Omo Oodua.

“The implication of this development is that the prestigious leadership that Professor Adebanji Stephen Akintoye, has provided for NINAS as Chairman since inception has now come to an end from today Tuesday 30th November 2021.

“Furthermore, Ilana Omo Oodua hereby withdraws its membership of NINAS with immediate effect. All the Yoruba People Worldwide that believe in the agitation for Yoruba Nation Self-Determination at home and abroad are, by this statement, notified to comply,” the statement stated.