I Prefer Girls That Still Stay Under Their Parents Roof- Zlatan

While many people are pleased with more women becoming more financially independent in the society today, it appears there are some who would rather have these women under their control.

One of such people is popular Nigerian singer, Omoniyi Temidayo Raphael professionally known as Zlatan Ibile. He recently took to popular micro-blogging platform, Twitter, to reveal his dating preference.

According to the Bolanle crooner, he prefers to date girls who still live with their parents as those ones are easy to control unlike the independent ones. 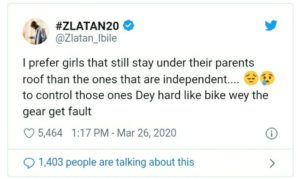 Twitter goes wild after Wizkid announce that he is getting married next year
VIDEO: Davido’s 30BG Celebrate Chioma On Birthday
Joeboy Has Been Misbehaving After He Made His First $1M – Mr Eazi
Naira Marley vs EFCC; What happened in court on Wednesday
Nikita – Body ft. Zlatan
Kanye West Remixes ‘Brown Skin Girl’ into a Gospel Song (Video)
READ ALSO:  Zlatan - Yeye Boyfriend