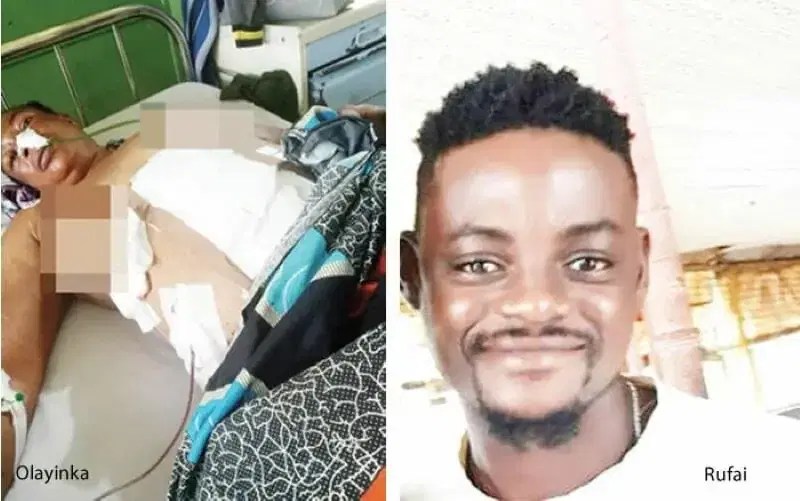 A food seller, Olayinka Ogunleye, was allegedly stabbed by one Opeyemi Rufai during an argument bordering on N400 at the Baonik Hotel, Magboro, in the Obafemi Owode Local Government Area of Ogun State.

Rufai, while lodging at the hotel, was said to have told Olayinka to prepare noodles for him. But after placing the order around 3pm, he left the hotel to attend to some other issues.

According to PUNCH, forty-two-year-old Olayinka said that when he eventually returned around 7pm, he rejected the noodles, claiming the meal was cold.

“He told me to throw it away. He insisted that he would not pay for the noodles. He gave me N1,000, told me to remove N600 to clear his outstanding debt and demanded N400 change.

“I asked who would pay for the noodles he rejected, but he just demanded his change. I refused to give him and he left.

“Around 10pm the following day, I was in the hotel kitchen when he suddenly entered and requested his change. I told him that I did not have change, but he poured the soup I was cooking in my eyes and used a knife to stab

me in the mouth, thigh, stomach and back.
“My intestine was visible to the point that I had to use my hand to cover it. His plan was to kill me inside the kitchen. All the hospitals I was rushed to rejected me except the Lagos State University Teaching Hospital, Ikeja, where I was stabilised,” she added.

Olayinka said she was later taken to the Lagos University Teaching Hospital, Idi Araba, where she was admitted, adding that she spent over two months in the hospital.

She said, “The incident happened on July 29, 2021. After I was stabilised at LASUTH, I was rushed to LUTH around 3am. When we got there, the officials demanded N300,000. Everyone, including the owner of the hotel, abandoned me except a customer, Ola, who pleaded with the doctors to commence treatment.

“I spent close to three months in the hospital. The owner of the hotel never paid any money for my treatment. The contributions from my family members, some good Samaritans, and my savings were used to treat me. I was also told the family members of the person that attacked me donated N120,000. But the whole money for the treatment was over N800,000.”

Olayinka’s brother, Kunle, while demanding Rufai’s arrest and prosecution, called for a proper police investigation into the case to get justice for his sister.

“The case was reported at the Ibafo Police Station and the boy (Rufai) was arrested. The mother of the boy was pleading for mercy, but I declined. They asked what they could do to resolve the issue and I said they should pay the balance to clear her medical bills.

“Surprisingly, I heard that the boy was released. And at the hospital, my sister was discharged, but was not allowed to go home because of outstanding bills.

“We were the ones that raised the money to clear the bills before she was allowed to go home. I later reported the case at the Zone 2 Police Command for investigation, but the policemen I met demanded N200,000 to commence investigation.”

The owner of the hotel, Adenusi Abiodun, said Rufai did not lodge in the hotel during the attack, adding that he (Abiodun) also contributed for Olayinka’s treatment.

The state Police Public Relations Officer, Abimbola Oyeyemi, who confirmed the incident said, “After the case was reported, the family of that woman came to the station and said the only thing they wanted was for him to foot the hospital bill of the woman.

“The suspect paid over N300,000 for the bill of the woman and she was discharged. It was the owner of the hotel who came to the station to take the suspect’s bail.