The controversial singer took to his Twitter page to vent out over her tiring his marriage has become.

He questioned how his followers would feel if he told them he was returning to bachelorhood.

Defending his reason for divorce, he stated that the longer he stays, the harder it gets, as marriage isn’t easy.

If I tell una say, after over 45yrs of marriage to my wife dat am going back to bachelorhood, what would you say? I don talk say marriage of a tin just no easy. The longer u stay, the harder it gets. What I should I do? I tire oooo”.

Taking to his comment section, a fan advised him how to make his marriage work.

The fan advised him to travel with his wife, play outside and shouldn’t allow quarrels to linger.

“Epa try travel small, go play outside small before you come back, everything go dey alright, nor let that small argument when you and madam get end things or just change her car.

Charly Boy reiterated that he is just fed up with the marriage.

This is coming as a surprise as two years back; the couple rekindled their vow.

According to Charly boy, his wife made him go on his knees to propose again, making it the 4th time since they married.

Sharing photos and video footage from when he proposed again, the 69-year-old wrote;

“See what my wife made me do again? I need to go my village to investigate my mumuness for dis woman hand. My faithful followers make una dey pray for meooo. How can one propose to the same woman 4 times in 45yrs. Dis tin no empty hand sha.”

In a follow-up post, Charly Boy revealed why he proposed for the fourth time to his wife of 45 years.

I have realized that we have become a Role Model Couple for the Institution of marriage.
“I understand why millions of people were so joyous and fascinated by those imageries.

“As an entertainer, I made a public show of it to tell and show people that longevity in marriages is possible if couples imbibe the right values.

“It was my way of inspiring couples that there are still good and meaningful relationships. Relationships is not just about who has money or who is bringing money.
It’s about genuine friendship because marriage is a difficult institution and if you find a partner that is more or less your friend and there is mutual respect, these are the qualities that can endure longevity in a marriage,” he concluded. 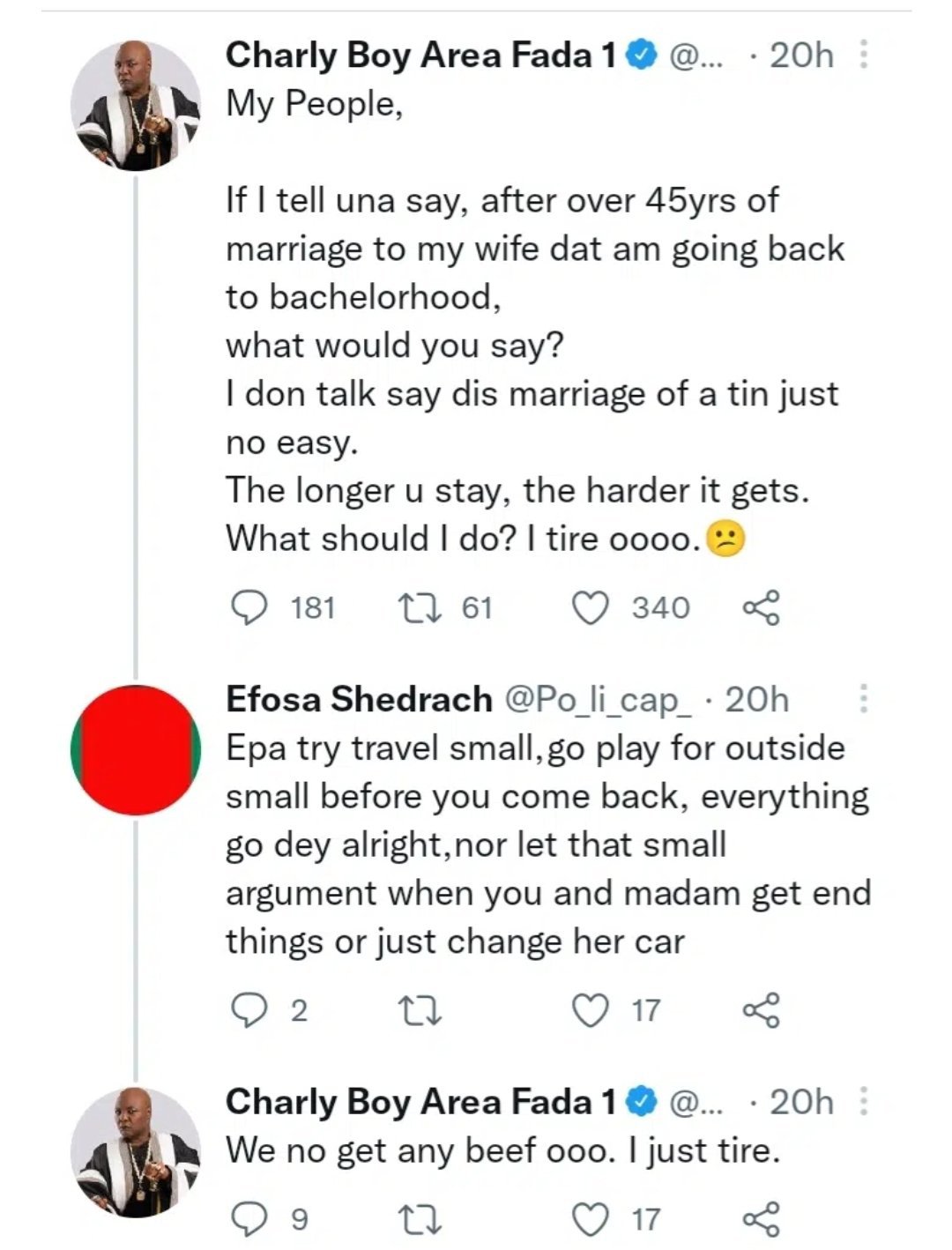 Just four years ago, Charlyboy disclosed on his Twitter page that he would divorce his wife but for something more important. On why he is divorcing his wife, Charlyboy wrote:

“On the 14th of December I will be divorcing my present wife to remarry on the 15th.

“As see finish don enter our matter is time for a new vow. Life is short so am living it like a gangster.”

BBNaija: Biggie instructs Modella to scatter all relationships in the house
Finally! Actor Wole Ojo is now married….. Or not?
To Top