Ex-YBNL signee, Viktoh, reacts to a claim that Olamide has used his destiny to run one or two packages

Former YBNL signee, Viktoh, who was under attck from a troll earlier today is now trending following his reaction to the said troll

It all started when the former Olamide protege adviced his fans on the last Sunday of the year 2019, to put their money where their mouth is

A troll who would have none of the advice took to the comment section and probed him over his career, stating that YBNL record label boss, Olamide has used his destiny to run one or two packages

Check out the reaction of Viktoh who got signed on to YBNL in 2014 alongside Lil Kesh but hasn’t gained as much commercial success with his music; 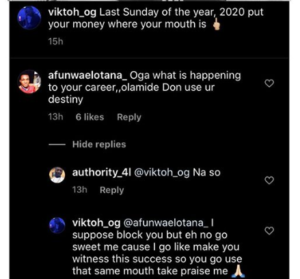