Popular Nigerian afrobeats singer, Burna Boy‘s 5th and latest music album, Twice As Tall, has made it to Top 10 albums in UK.

The self acclaimed African Giant has got the whole world listening following the release of his 5th album.

Just few days ago, he took over American billboards in barely 48 hours of releasing the body of art.

Recall also that Twice As Tall ranked No.1 in 1111…countries. 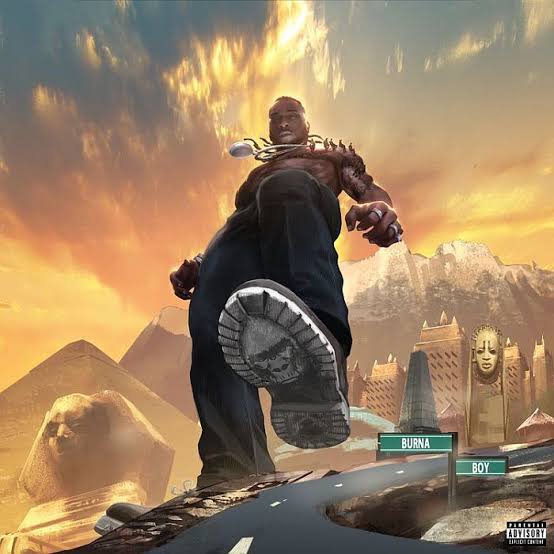 The album has now made it to UK’s Top 10 Albums and that’s a big win for Burna Boy, his label, Diddy and Africa at large.

According to a tweet made by Official Charts and retweeted by Burna Boy, Twice As Tall is gradually climbing to UK Spot 1 as it is currently No.8 in the UK.

Official Charts tweeted… “Three more new releases could secure a Top 10 debut this week; British folk singer Kate Rusby is eyeing her first Top 10 with Hand Me Down at 6, Nigerian rapper and singer Burna Boy is at 8 with his fifth studio album Twice as Tall, and Rumer’s first country album Nashville Tears is at 9, possibly her first UK Top 10 album in eight years.” 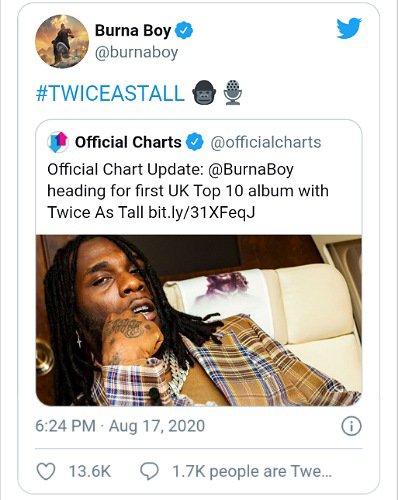 Mr 2Kay has a New Look! Check it out
Naira Marley Brought Mompha On Stage At A Concert (Video)
Davido Doing Good Does Not Pay In Nigeria
“I have been aging backwards since i left my brother” – Peter Okoye
Singer, Waje Reveals What She Yearns To Do Intimately With Her Future Husband
Watch Moment Davido Snubbed Olamide At Kizz Daniel’s Concert Despite Running After Him
READ ALSO:  Burna Boy buys a Rolls Royce car few days to 2020

Tekno Releases Tracklist For Debut Album “Old Romance” Sensational singer, Tekno has released the tracklist for his highly anticipated debut album “Old Romance.” Since he made his debut, Tekno has been heavily criticized for not […]

Niniola’s Dream Comes Through As Femi Kuti Features In Her Upcoming Album Self-styled queen of Afrobeat singer, Niniola Apata simply known as Niniola is currently in a happy mood after being able to secure legendary […]