African Giant has become the most streamed African album on Spotify with over 200 million streams to its credit.

This makes it the first African album to achieve such feat on the the online streaming platform. The body of work was released in 2019 after a drama the artiste stirred up following his Coachella call-up.

He had lamented that his name was written in small fonts, whereas he was an African Giant. An act which birthed the album.

The album also earned him a Grammy nomination for the best international act alongside multiple Grammy winner, Angelique Kidjo. 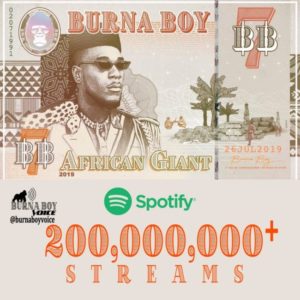 Tekno Releases Tracklist For Debut Album “Old Romance” Sensational singer, Tekno has released the tracklist for his highly anticipated debut album “Old Romance.” Since he made his debut, Tekno has been heavily criticized for not […]

“You inspire me so much” – Simi celebrates hubby, Adekunle Gold on the release of his new album “AfroPopVol1”

“You inspire me so much” – Simi celebrates hubby, Adekunle Gold on the release of his new album “AfroPopVol1” Singer and mother of one, Simi has celebrated her husband, Adekunle Gold with lovely words on […]