Grammy award winning singer, Burna Boy has waded into the brouhaha that has erupted after the Lagos State Panel of Investigations released its report on the #EndSARS protest that occured in November, 2020.

According to the article, Major General Taiwo, who testified before the panel in the course of the probe, intimated that the soldiers acted on orders from Buratai, who received orders from President Muhammadu Buhari, the Commander-in-Chief.

Recall that the minister of information and culture, Lai took a firm stand against the backlash following the Lekki toll gate incident as he declared that there were no casualties at the gate when the army were called in to check on the peaceful protesters.

Burna boy went ahead to release a song about the Lekki toll gate as he sympathised with the blood that was spilled on that day. 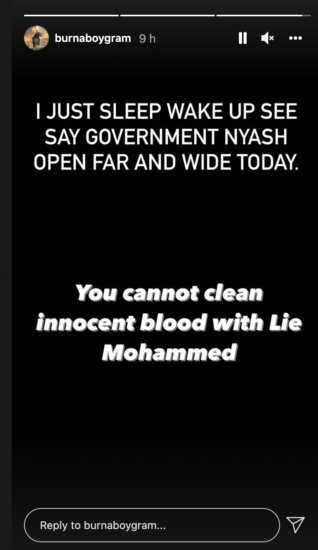