Crossdresser Bobrisky has warned social media critic Tosin Silverdam not to post anything about her anymore if not she will call for his arrest wherever he is.

Bobrisky reacting to a video of Tosin who actually makes fun of almost everything about her claiming now that BBNaija is back, Bobrisky won’t be that important to most people warned him never to post anything about her.

Bobrisky in her post warned Tosin never to post anything about her on his page again if not she will call for his arrest wherever he is saying it’s enough with the clout chasing using her name. Bobrisky added that she has gathered enough evidence to use against him if he doesn’t stop chasing clout with his name.

According to Bobrisky, Tosin can build his brand without using her name and he isn’t a blogger without a face hence if he dares use her name for clout again, she will arrest him as she isn’t like other celebrities who would keep quiet over whatever he does with their name.

Adding that if he has money to fight her, he can continue using her name for clout and watch how she flex her power on him by getting him arrested in Kano where he stays and gets him transferred to Lagos or Abuja to see to it that he gets punished with the evidence she has against him. 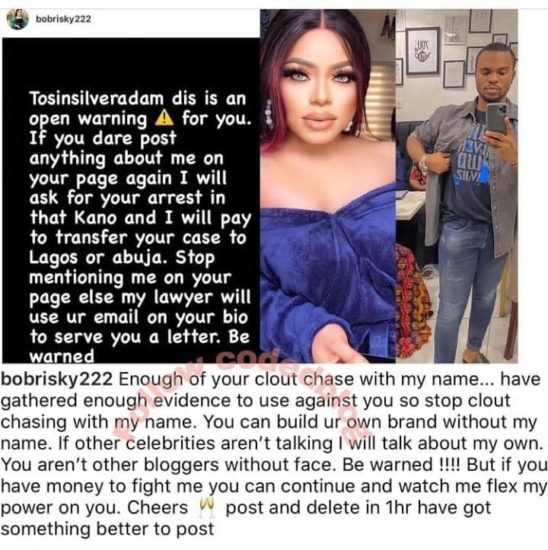 Reality TV star and brand influencer, Kathrina Jones better known as Ka3na has thrown shades at popular crossdresser, Bobrisky on social media as she laments over her tax obligations. Ka3na expressed her confusion over how […]

A yet-to-be identified 35-year-old man has been arrested by operatives of the Nigeria Security and Civil Defence Corps (NSCDC) for allegedly defiling a five-year-old girl in Kebbi state. This was disclosed by the commandant of […]

Bobrisky Finally Shows Of His Butts After Enlargement Surgery [Video]