Big Brother Season 7 housemate, Beauty’s brother known as Honorable King Kwayi Tukura has made a u-turn after being slammed for defending his sister’s disqualification

Reacting to her shocking exit, Kwayi Tukura in video hailed her for giving Nigerians the real content.

He urged everyone to take it easy as everything is merely show business. ‘Take am easy all this is na content, na show business”

Speaking further, Beauty’s brother said his sister gave the most interesting content in an already boring house. Stressing that she was the most interesting person to watch. He then used the opportunity to welcome her back home, as he urged her to go out and attain greater heights.

Kwayi Tukura’s reaction stirred up negative comments as he was slammed heavily for supporting the bad behaviour of his sister.

Following the backlashes, Kwayi Tukura has issued an official statement apologising for his comments over sister’s disqualification. He then begged Nigerians to forgive his sister for her bad behavior, stressing that Beauty is a beautiful soul who could not manage her emotions while trying to play her role in the house….

Kwayi Tukura shared a screenshot of his statement and wrote:

‘Basically I appreciate the support given her by people who don’t even know her ,my point was really she’s human and of course she will work on managing her emotions better,I also most definitely wouldn’t encourage that she displayed her emotions in that manner ,the video was not an indication of supporting violence in the big brother house .
I deeply regret if that message came across wrongly.

That video is also not the view point of @beautytukura on the matter nor is it that of her management team ,it was mine and I hope everyone offended by it will realize my true intent for making it.

It was just a brother trying to stand up for his baby sister .’ 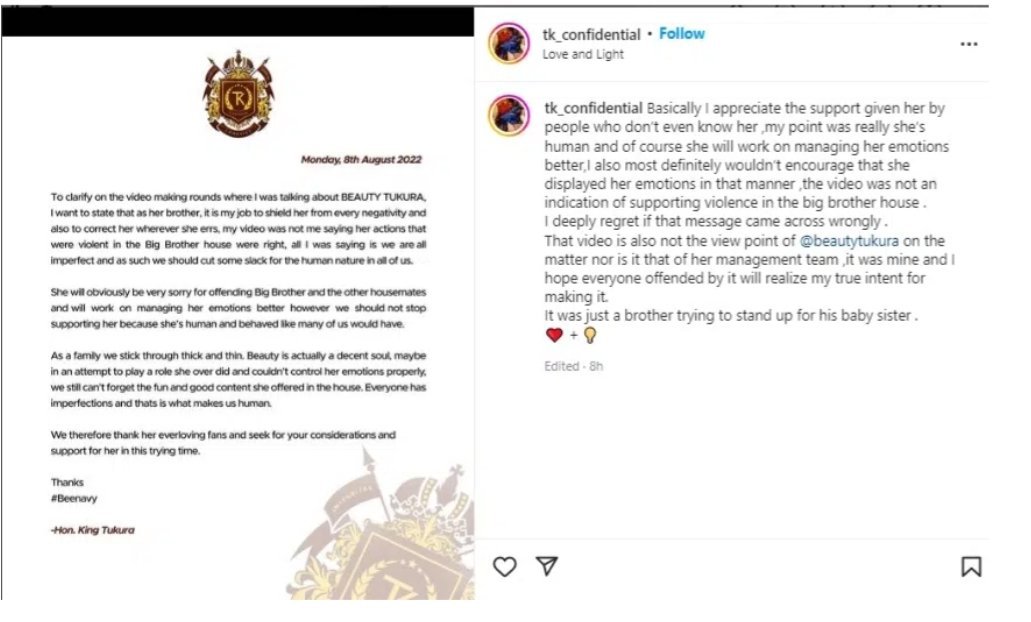 Kizz Daniel arrested in Tanzania for not performing at his concert (Video)
Actress and Babymama to Yoruba actor Murphy Afolabi, begs for help as she calls out the actor for threatening her life
To Top