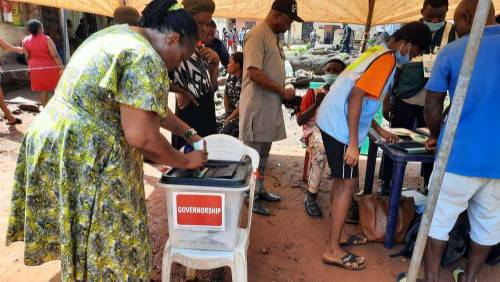 The organisation based its assessment on reports derived from 500 election observers and 27 mobile observers deployed to 229 out of 248 polling units across the 21 Local Government Areas of the state.

Yiaga Africa, a non-governmental organisation, says it received about 66 critical incident reports from the Anambra State election, which if unaddressed, could undermine the integrity of the election results.

The organisation based its assessment on reports derived from 500 election observers and 27 mobile observers deployed to 229 out of 248 polling units across the 21 Local Government Areas of the state.

It stated that its preliminary findings from the 66 cases showed that there were delayed opening of the polling units; delay in the accreditation and voting processes and under-deployment of officials to polling units.

Yiaga called on the Independent National Electoral Commission to find a lasting solution to the problems encountered and ensure registered voters do not get disenfranchised due to technology or logistics-related problems.

The group said, “The WTV election day situational report provides information and data on the commencement of polls, availability of election materials and critical incidents that may impact the quality of the election.

“This report is based on verified reports received from sampled polling units as of 4pm on election day. In addition, sixty-six critical incident reports were received and processed as of 4pm. These incidents could potentially undermine the integrity of the election if unaddressed.

”The delays were occasioned by poor logistics management. Yiaga Africa anticipated these challenges based on our pre-election observation, hence the call in our pre-election statement urging INEC to make contingency plans in situations where respective transport unions /companies reneged on their contractual obligation to deploy.

“Deployment of Polling Officials: Yiaga Africa WTV observed that an average of 2 polling officials were deployed in those polling units where INEC officials and materials arrived.

“Deployment and non-functionality of Bimodal Voters Accreditation System (BVAS): Yiaga Africa WTV observed the deployment of the BVAS to the polling units. However, Yiaga Africa received reports of the BVAS failure to authenticate voters’ fingerprints and photos even where voter details were confirmed on the voter register.

“Critical Incidents: Non-opening of Polling Units by 12 noon: Based on verified reports from Yiaga Africa observers, 19% of polling units failed to open by 12noon. In other words, INEC officials didn’t deploy to those polling units. These incidents are mostly concentrated in Anambra South Senatorial District (23.5%), Anambra Central (17%), and Anambra North Senatorial districts (13%).”